I fell asleep by 6:30 pm on Sunday. It rained off and on all night and was still sprinkling at dawn. I wanted until 6 am and finally the rain stopped. I packed up and started off in search of the PCT.

Almost every bit of trail is covered in snow for the first few miles: I was guided by GPS. 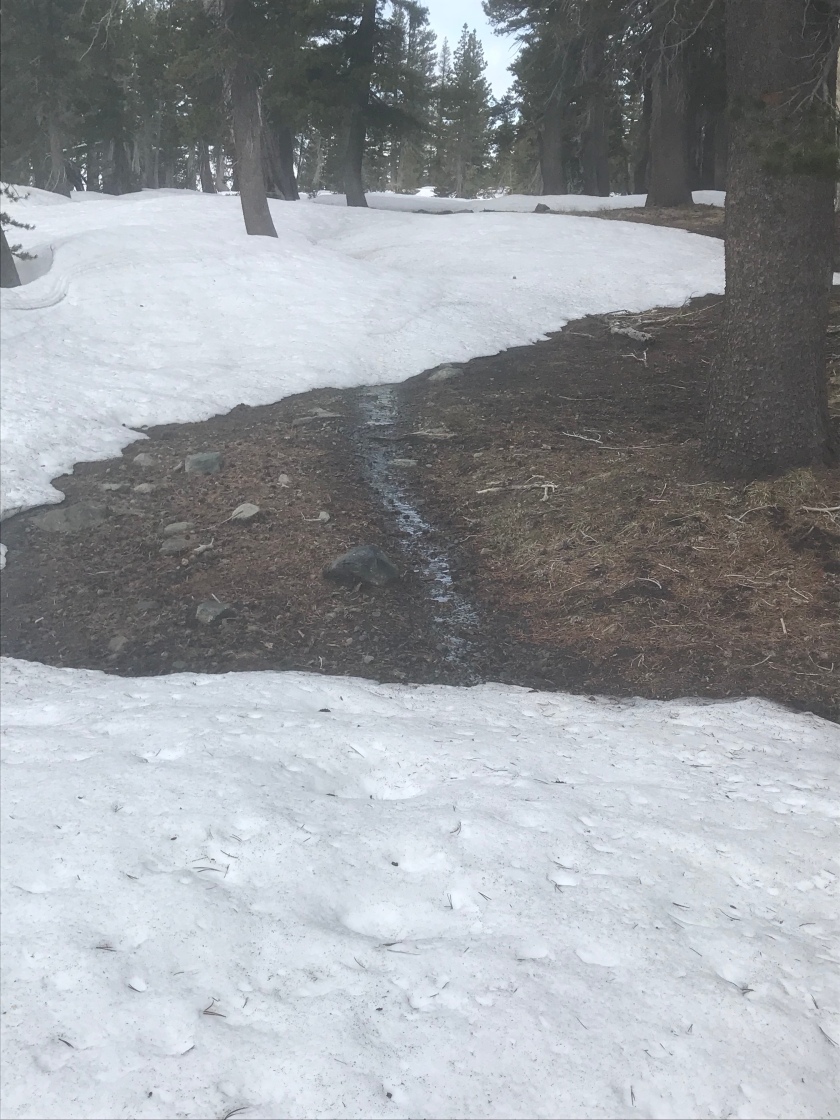 Once the trail hit a southern exposure the snow was mostly melted! Yay! 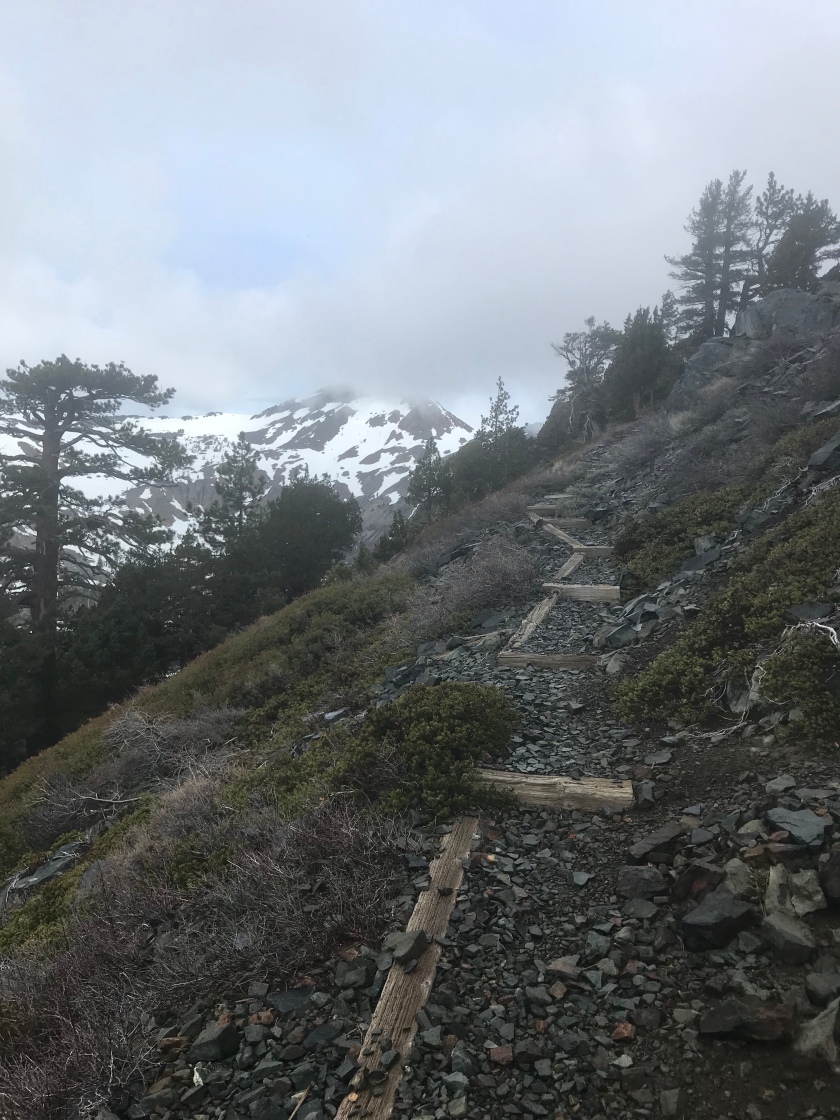 I reached Dicks Pass and found it snow covered: I could see frozen Dicks Lake below, but could not see the trail or tacks. 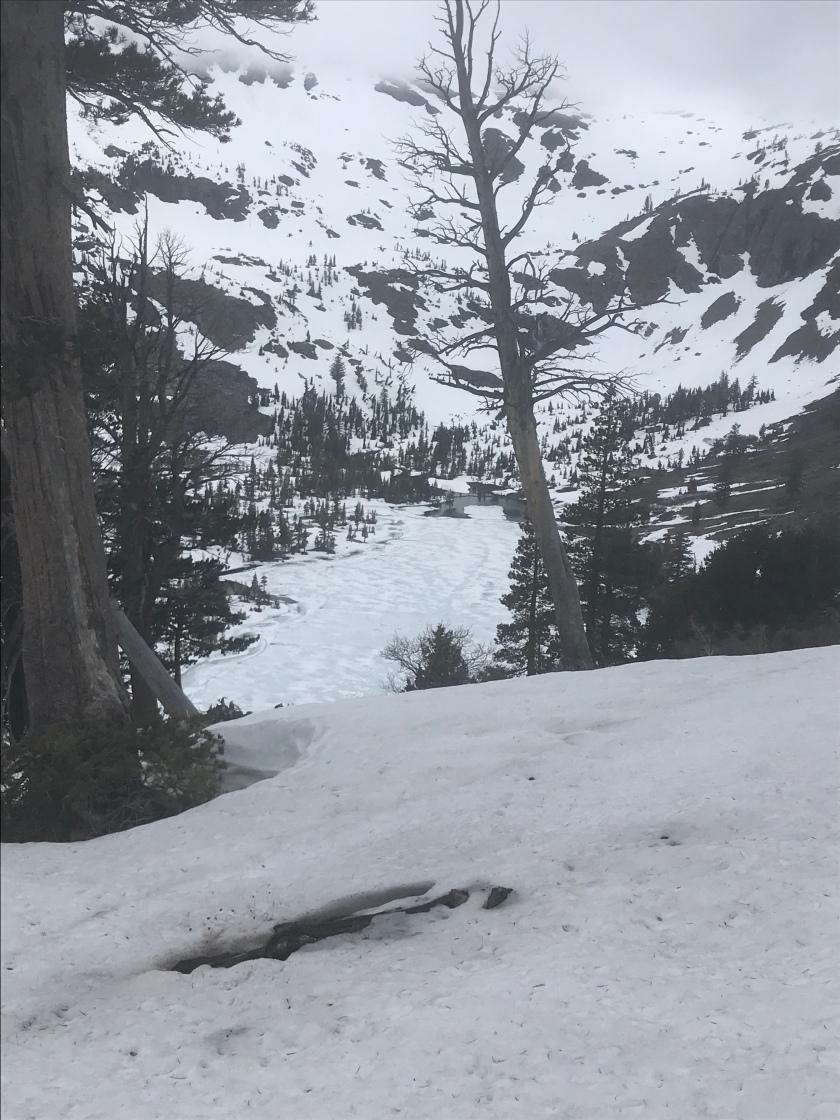 The snow was firm so I made my own route down to the lake. There was an access trail next to the lake that I followed to re-meet with the PCT.

There is another steep descent at Fontanellis Lake. This required crossing the stream exiting the lake, which was flowing too fast and deep for me to try solo. I checked the map and saw the stream runs down to Upper Velma Lake which has a trail leading to the PCT. so, once again I cross-countried down a steep snow field. Here’s what a Post-hole looks like: 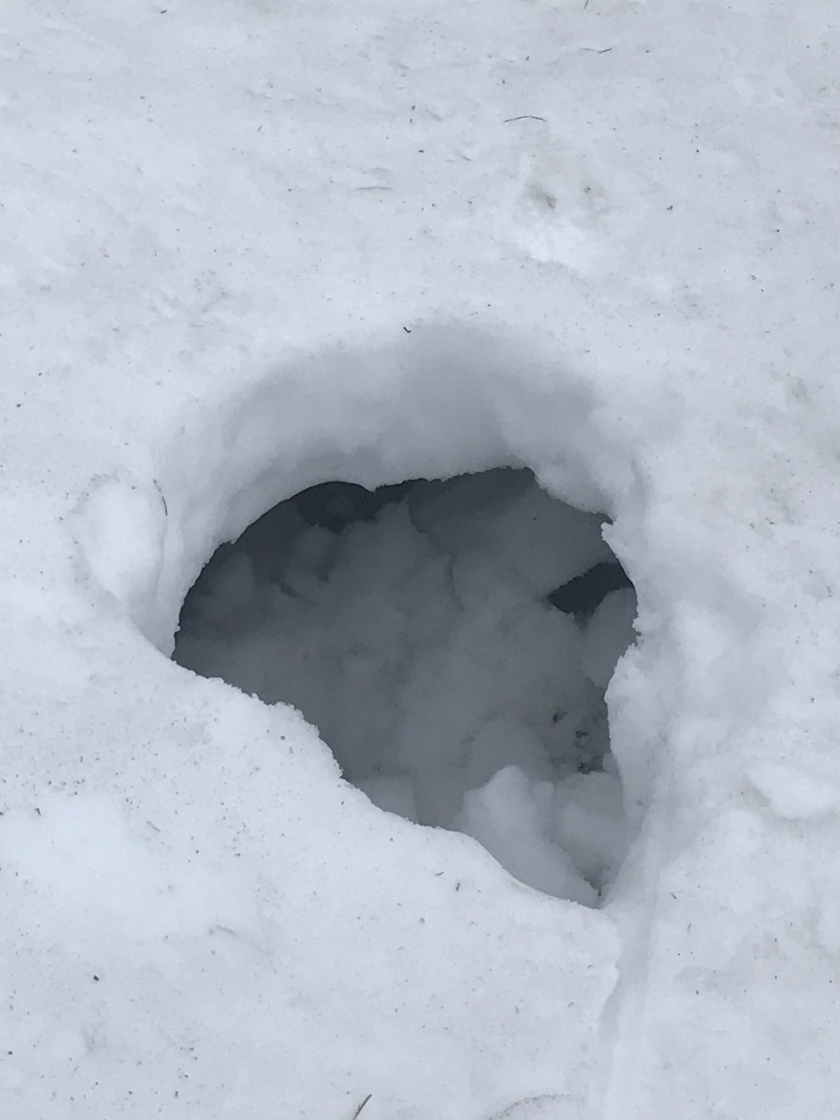 That was a big one that dropped my whole body about 3 feet! Fun climbing back out.

All along the way I was looking for a good crossing point. I found a nice stone crossing at the lake edge where the water wide was moving slow. 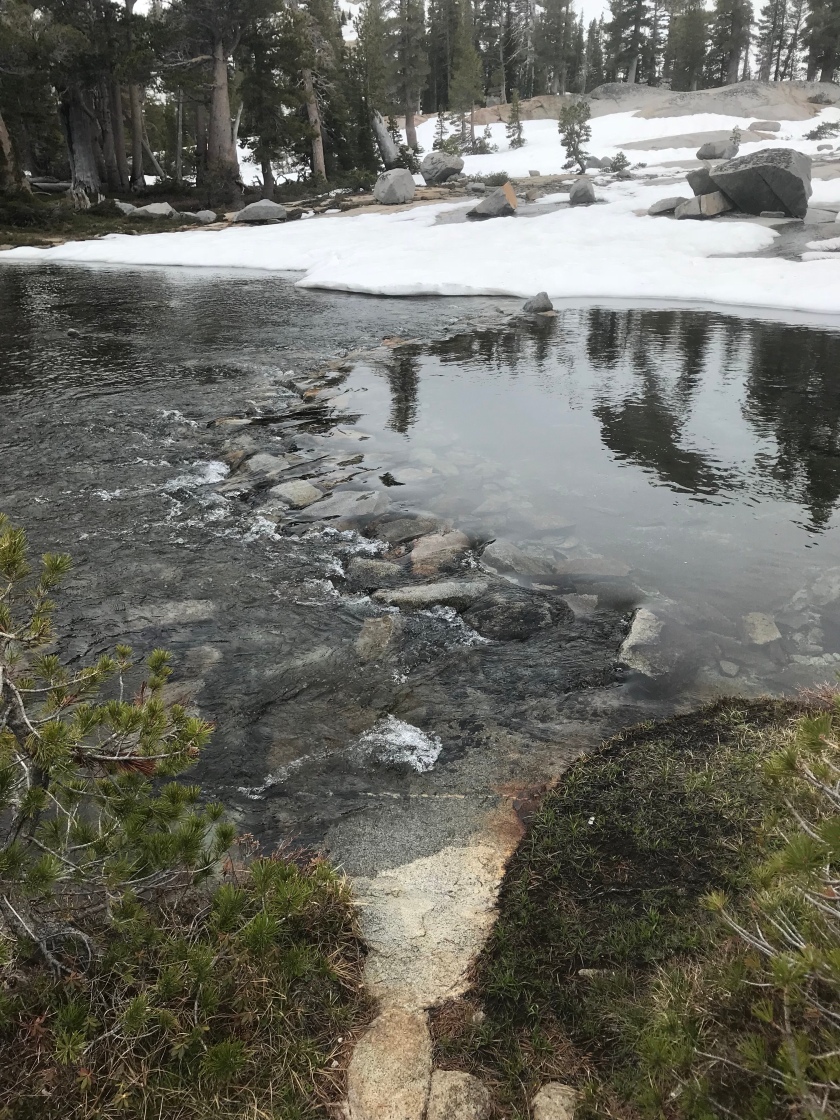 I was able to cross without getting wet! Now I just need to find my way back to the trail! 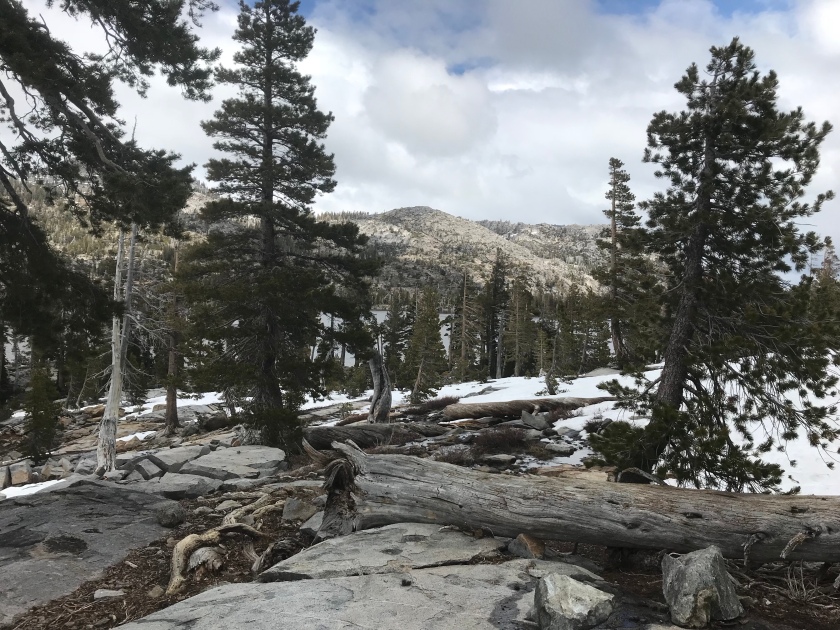 It looks like the snow melt this year or last repositioned this bridge- no trouble, it still works fine! 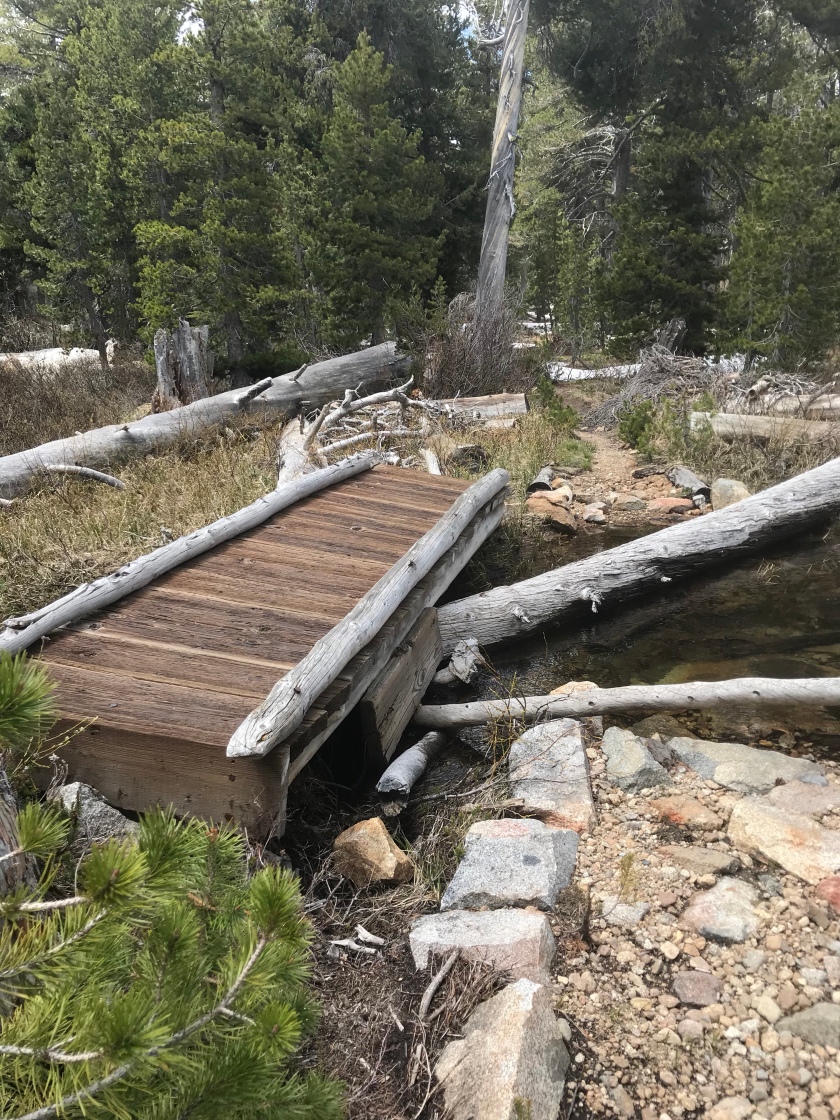 My camping spot is at Phipps Creek at the point where two streams combine. The trail crosses at the deepest and fastest part of those combined streams. I looked around and found it easier to cross each of the two streams. When I got to my camping site, I set out to collect water and saw my second bear can washed up in the willow across the stream – what’s going on? 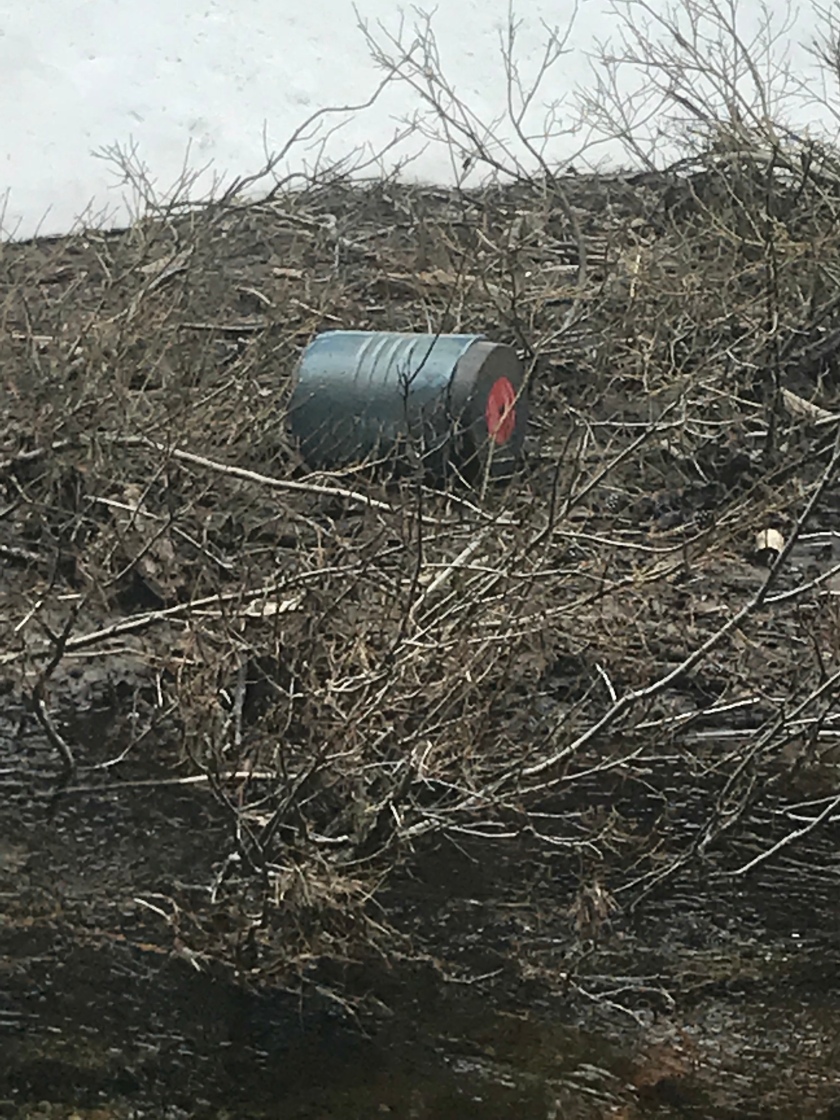 I set up camp and again was in bed before sunset.

It rained about half the night. Sometime late when it had stopped, I peeked outside and saw stars. I decided to open my rain fly in hope of getting more air circulation to prevent condensation inside the tent: I don’t want a wet sleeping bag.

In the morning I find my bag dry, yay!