Last night after I posted Saturday’s blog, I went to the local Pizza joint for dinner – several other PCTers had the same idea and so we filled a large table.

from left me, Porter, Handel, Grundle, Abi, Mark and Conrad.  That’s the same Abi from the Julian hitchhiking adventure! She now has a trail name, and that is a great story… She hiked a few miles out of Warner Springs and set up camp. From her tent she kept hearing animal noises and was getting spooked. Happily, along came Hanzel and Grundle. Abi filled them in on the noises so they set up camp uphill from Abi telling her that she will be the sacrificial one just in case it is a mountain lion! They joked that she was the bait like the goat in “Jurassic Park” — the one for the T-Rex… That goat’s name? Earl.  And now Abi is “Earl”.

Sunday morning I caught a ride to the Humber Park Trailhead to hike up the Devil’s Slide Trail and return to the open part of the PCT. This trail, I believe was my first backpacking trip in Boy Scouts. I was 11. I remember everything hurting. I remember whining, crying and lots of self pity. I think my scout friend Glenn was equally distressed. I remember reaching “The Saddle” and decided that I would survive this backpacking thing.

Now as I hike it again it seems a pretty nice trail. I find the first snow:

I reach “The Saddle” without tears, but I’m pretty sure I recognized some of the rocks I sat on bawling some 37 years ago.

My mission today is to assess whether Mt San Jacinto is peakable, if so, I’ll hike it and camp nearby. If not, I’ll try to get past the infamous “Fuller Ridge”, and failing that, return to Idyllwild and take a non-snow route.  I head out towards Fuller Ridge and have great views 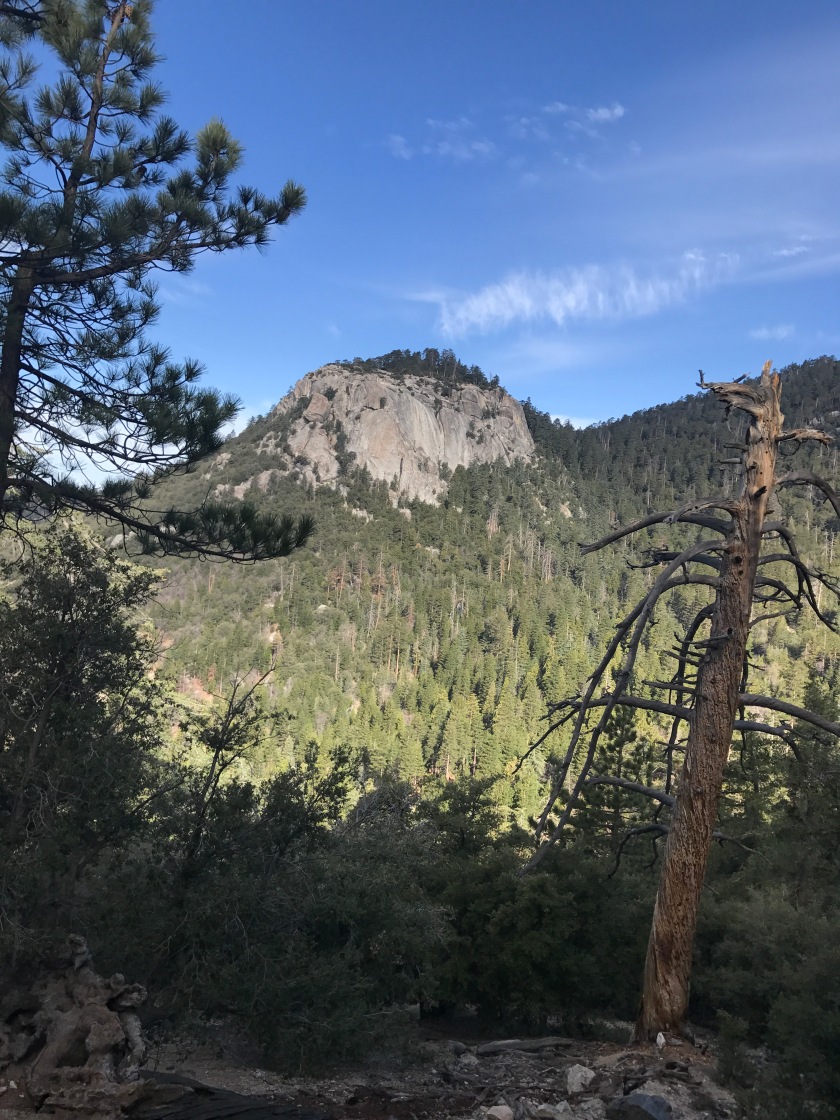 I did not see any other PCT hikers but did run into a lot of weekenders and day hikers that all failed to get to the peak because of the snow.  I guess that means no peak for me, too bad, I was really hoping to bag it and San Gorgonio.

I started hiking on the Fuller Ridge Trail at 2pm.  The trail is a 5 mile ridge top traverse starting at 9,000 feet and dropping to 8,000.  The trail is known for its steep sides and for snow accumulation.  The snow right now is hard crusted, but has some footprints that provide both a direction and a foothold.  I wear microspikes attached to my shoes to get better traction on those footholds

But it does get steeper.  About halfway through I met a couple of guys trying the hike without any spikes or crampons.  The said they were sliding a lot and bumping int trees.  Yikes.

The ranger had warned me that nothing less than snow boots, full crampons and ice axe should be used on Fuller Ridge.  I made the first mile ok and was treated with this view Her oooking south

Note the patchy snow – it was only bad the first mile (I thought) and I decided there was no going back.  It was chilly but there was plenty of water.

Here’s the view looking north with wind farms and I-10 far below. 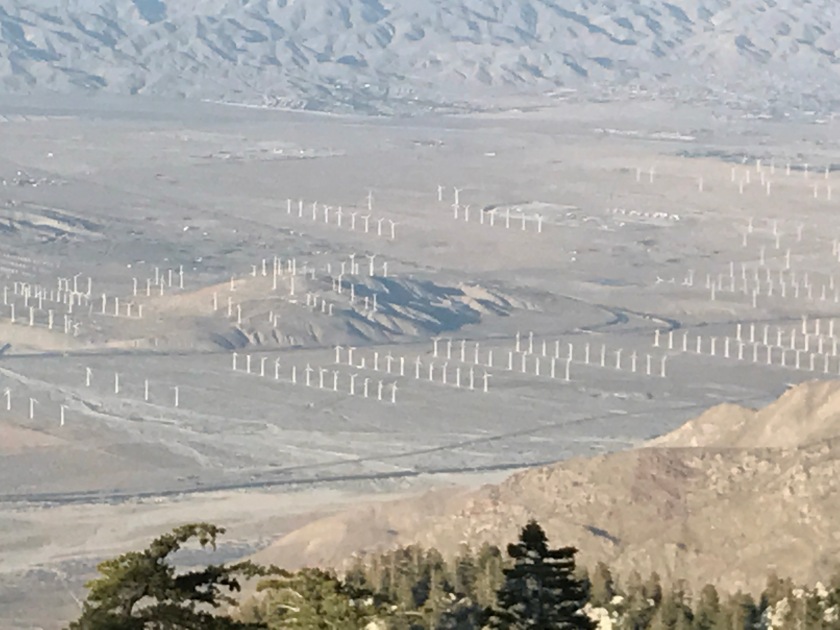 The last two miles were tough because I was very careful about foot placement and about checking my GPS app to see Where the trail is under all the snow.  The tracks of those who hiked before me (days ago?) sometimes split up then reconverge.

I finished the 5-mile section in about 5 hours.  That is way slower than I hap hoped.  The sun had set, my shoes are soaked and my toes are getting quite chilly. I’m still at a pretty high elevation so I set up my tent, blow up my sleeping pad and don my sleeping wool underwear.  I dry off and massage my frozen toes and put on my nice wool socks.  30 minutes of toe calisthenics  and they are still cold. I remove the socks and my feet start warming.  I slip my hands into the socks and it’s cold in there.  I guess the lesson is wool to keep warm not necessarily to get warm.

I got and stayed warm and slept great!